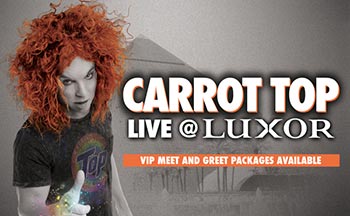 Get tickets and a discount rate today!

Multiple award-winning comedian Carrot Top leads a one-man show filled with hilarity using rollicking inventions that are based on pop culture and current events. Although he’s been performing in Vegas for years, his show never seems to get old and, in fact, just gets better over time. This is a show that will keep you laughing the entire time, prepared to leave with jaws aching and a grin that just won’t stop.

Carrot Top is a prop comic and arrives with trunks upon trunks, giving his show the feel of a huge Vegas stage show, while being a bit dark, twisted and self-effacing. Expect vulgarity and inappropriate content; think dirty, very dirty. Carrot Top mixes in his trademark inventions with a caustic observation humor that seems to be more current than what you’ll find in any other Vegas comedy show. He’ll joke about anything and everything, including Vegas and anything that might be in the minds of his audience. This is one of the reasons you’ll never see the same show twice and it continues to remain fresh year after year.

While many people go to the show feeling skeptical, by the time they leave, they’ve become a big fan. Carrot Top engages with the audience and has impeccable comedic timing. If you’re in a bad or so-so mood when you arrive, within minutes your attitude will be transformed and you’ll instantly become aware of the true meaning of “laughter is medicine.”