Despite its nickname “Sin City”, Las Vegas has so much more to offer than just gambling, alcohol, and adult-oriented entertainment. We prefer the nickname “The Entertainment Capital of The World” because it encompasses more of what this fascinating City can provide its visitors.

Read on to learn about the best Las Vegas magic shows in 2022. 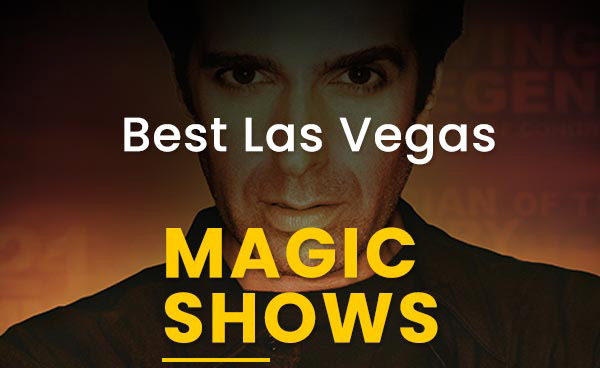 The biggest problem, however, is that there is too much to do in too little time. With so many shows to see, it can be overwhelming for visitors to choose the best ones.

Whether you’re a magic fiend, a music lover, or a comedy fanatic, Las Vegas magic shows have it all.

David Copperfield is a mainstay of the Las Vegas magic scene.

What better way to kick off your trip to Las Vegas than with a visit to see the “Greatest Illusionist of Our Time”, David Copperfield?

Despite his long-serving and hugely popular TV career, David Copperfield’s work is something that needs to be witnessed first-hand with your own two eyes. His show is bound to leave you questioning reality and wondering if there really is such thing as the supernatural. How often is it you get to see a man sew himself in half on stage and live to tell the tale?

Few acts can top David Copperfield’s mind-boggling illusions and captivating storytelling. If his show is in town during your visit to Las Vegas (which it probably will be), it’s one that simply cannot be missed. 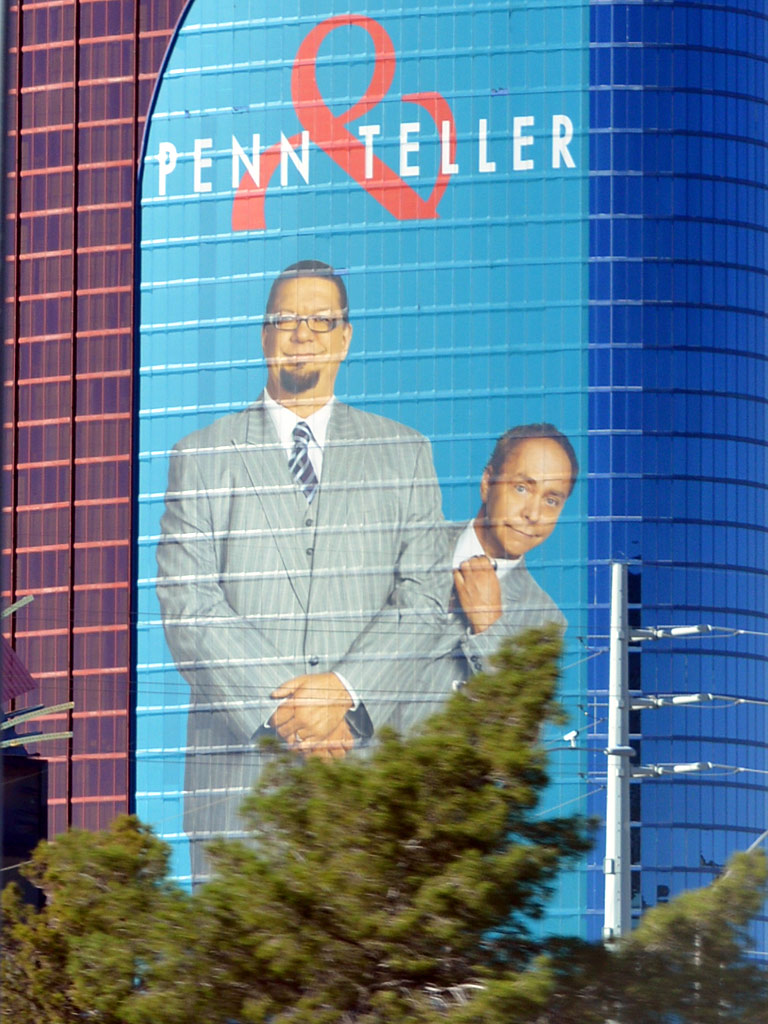 You don’t need to be a fan of magic to have heard of this mysterious duo before. Penn & Teller have been blowing minds for decades, mixing the elusive art of magic and sleight of hand with straight to the point and fun explanations as to how exactly they did it.

The problem is, their magic is so good that even an explanation from the guys themselves will still leave you baffled and scratching your head trying to figure out what in the world your eyes just witnessed.

Penn & Teller have been performing on the strip for over 40 years, headlining the iconic Rio Hotel and Casino. That’s a long time to be performing magic! Nobody knows how much longer their show will go on, so make sure you see this one before it’s too late. Shows are performed every night until the end of 2019. 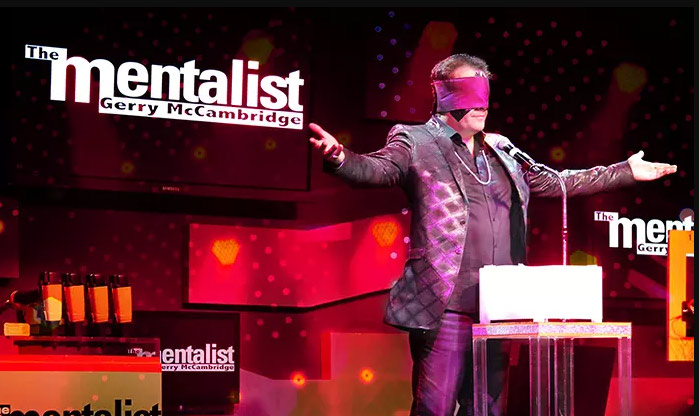 Gerry McCambridge displays his mind reading skills during a show

Casually reading minds and predicting the future, Gerry and his crew will leave you feeling amazed, shocked, and somewhat scared of how a man can pull off such feats. If you’re a fan of mentalism and “mind-reading”, you can’t miss this one.

Get 50% off Gerry McCambridge Tickets

Nathan Burton made his debut on the Strip in 2001 and he’s still leaving audiences in stitches.

If you prefer your magic shows to leave you in stitches with tears of joy in your eyes, then Nathan Burton’s Comedy Magic is the show for you. After a hugely successful TV career, Nathan Burton made his debut on the Strip in 2001 and has been entertaining magic fans ever since with his unique blend of illusions, magic, and comedy.

His show has comedy, beautiful girls, incredible illusions and mind-boggling magic tricks. What more does one need from a Las Vegas magic show?

Get 50% off Nathan Burton Tickets

If hypnosis is something you’re into, then seeing Marc Savard’s Comedy Hypnosis needs to be at the top of your bucket list. Blending real hypnosis with hilarious performances and gags, Marc Savard performs on a night that you will never forget.

After subconsciously auditing a select few members of the crowd, Marc continues to “relax” his volunteers into a state of complete control, and the antics that follow are guaranteed to leave you in stitches laughing.

Marc Savard has a unique way of interacting with his volunteers and the crowd, putting on a show that is unlike anything else on the Strip. If you are in town when Marc is performing, do yourself a favor and grab yourself some tickets. If you’re feeling brave, why not raise your hand and volunteer to be a part of the show?

Get 50% off Marc Savard Tickets

If you have ever seen Criss Angel on TV, you probably understand why we predicate our recommendation with a “viewer discretion” warning. There will be blood, there will be screams and there will be horror.

With over 75 mind-blowing acts performed every single night, the “Mindfreak” is perfect for those who like their magic shows to leave them on the edge of their seats, biting their nails in anticipation of what’s coming next.

It’s probably not the kind of show to see with your 90-year old Grandma, but if you love the darker, more mysterious side of magic then Criss Angel Mindfreak is a show that you cannot miss.

Paranormal: Mind Reading Magic is currently on its second tour of Vegas.

As the winner of some of the most prestigious awards in the world of Magic, International mentalist Frederic Da Silva lights up the Las Vegas Strip with his mix of mentalism, magic trickery, and straight-up mind-reading.

If there is any act in the world that can make you question reality, it’s Paranormal: Mind Reading Magic by Frederic Da Silva. His unique way of telling people what they are thinking of, or what things they have in their pocket is guaranteed to leave you baffled and wondering if he is really just a human.

If you’re a fan of Cirque Du Soleil, you may have heard of Xavier Mortimer before. His Las Vegas smash hit “Magical Dream” takes you on a dreamy adventure through several “acts”, slowly building up the intensity of magic, comedy and “Cirque Du Soleil style storytelling”.

Headlining the Sin City Theater in Planet Hollywood, Magical Dream has been a mainstay show on the Las Vegas Strip for a while, entertaining crowds and receiving the highest amount of praise from industry professionals and the thousands of captivated visitors who are lucky enough to see the show.

Magic Dream is fun for all of the family and is the perfect way to start or end your trip to the “Sin City”. Shows are available to see until the end of the year.

Piff the Magic Dragon is the and his sidekick Chihuahua.

Bizzare, hilarious, intimate and unforgettable are just a few words that describe Piff’s magic show, a relatively new addition to the Las Vegas Strip. Hailing from the United Kingdom, John Van Der Put (Stage name: Piff) is fresh off his tour with Mumford and Sons as well as a stint on the hit TV show “America’s Got Talent”

The small, intimate setting leaves you no more than 30-feet away from the stage where Piff and his furry Chihuahua companion Mr. Piffles perform some of the most baffling magic tricks you will ever witness. Throw in a bunch of belly laughs and some hilarious crowd interaction and you have a show that is destined to light up the Las Vegas Strip for years to come.

Mac King is the king of comedy magic shows.

The final recommendation for the Best Magic Shows in Las Vegas in 2019 is the afternoon smash hit, Comedy Magic. Donning a plaid suit and an unusual hairstyle, Mac King is a family-friendly comedian who is well-known for putting on one of the best afternoon magic shows in Las Vegas history.

His unique style of magic is captivating, easy to understand, and hilariously funny. Comedy Magic is ideal for children of any age. His goldfish tricks are well-known and are not to be missed.

Mac King has been entertaining people since he was just 10 years old and his personality and demeanor is easy to like, making his magic tricks and storytelling even more engaging than it already is.

Mac King Comedy Magic is available to watch on most afternoons, with most days offering multiple showings. Is there a better way to spend an afternoon in Vegas?

So there you have it – 10 of the best magic shows that Las Vegas has to offer. Regardless of whether you prefer comedy, sleight of hand, illusions, or mind-reading, Las Vegas has something for everyone, young and old.

Hopefully, this list has inspired you to reorganize your trip to make sure you see as many of these shows as possible before they leave the Strip for good.