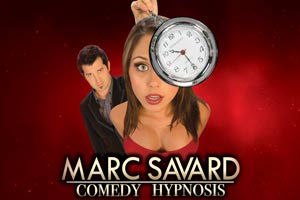 Get 52% off tickets to Marc Savard Comedy Hypnosis at the V Theater at Planet Hollywood in Las Vegas.

Holy Hit” says E! Entertainment – You can see the show or BEthe show! Watch hilarious audience volunteers live on stage as the number one hypnotist in the world, Marc Savard, controls their thoughts and actions. You won’t believe what he can make them do!

Imagine if you could get someone to believe, do or say anything you wanted. What if, just through the sound of your voice, you could convince people you were invisible or that they found you irresistibly attractive? While this may sound like fantasy to you, it is the everyday world of Marc Savard. He has toured internationally, entertaining hundreds of thousands of people in a comedy hypnosis show no one should miss. Shows at 10:00PM Saturday–Thursday, DARK FRIDAY. Ages 18+ only.