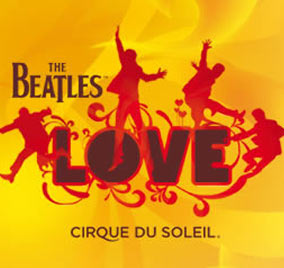 The Beatles LOVE by Cirque du Soleil is back in 2022, get your tickets now.

LOVE is Cirque du Soleil meets the Beatles, celebrating the iconic band’s legacy and drawn from the poetry of their lyrics. Launched in Vegas in 2006, the show features Beatles’ tunes that date back nearly 50 years, but this multi-media masterpiece shows no signs of aging.

LOVE has even been blessed by the surviving Beatles, Paul McCartney and Ringo Starr, as well as the living spouses of the late John Lennon and George Harrison. Cirque collaborated with Sir George Martin himself, the producer of nearly all the original Beatles records, who arranged the music for this production whose message, of course, is “LOVE is all you need.”
The international cast of characters offers a raw energy that is underscored by a spectacular aerial performance as well as freestyle dance and extreme sports. True to Cirque tradition, each scene unveils a new surprise with performers come from far below the stage via a trampoline or an elevator, silks and trapezes that are flown incredibly high over the heads of audience members as well as bicycles, skates and even stilts.

For Beatles’ fans, LOVE is a must, but even for those who aren’t, you’re almost sure to be left feeling euphoric by the show’s end with its surreal and stunning visuals as well as the incredible musical arrangements.