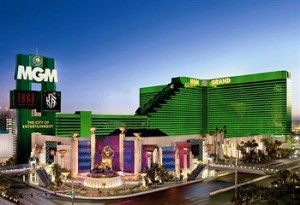 The MGM Grand is a massive hotel with a great vibe, especially for those who are going to Vegas to really live it up. The check-in line can be long; if you’re flying in, use the MGM check-in counter at the airport.

Avoid the west wing rooms and reserve a Grand Tower room instead – the higher the room level the quieter it will be. These are some of the best rooms in the city for the price, spacious and comfortable with good views

The Grand Pool Complex is one of the best on the Strip. The topless sunbathing area, “Wet Republic,” is one of the hottest spots in the city with music and a party atmosphere along with great people watching. If you want something a little more family friendly, head to the lazy river. Keep in mind that all the pool areas fill quickly, if you want a spot in the shade arrive early.

For those who don’t want to risk a lot of cash but would like to try their luck, head to Sigma Derby- fun, cheap and won’t drain your wallet quickly.

Free Things to do in Las Vegas