Crowded Vegas Strip – Busiest and Most Expensive Days of the Year

Las Vegas is one of the greatest places in the world to take a vacation. Far more than just gambling, Las Vegas has become a hub of entertainment, fine dining, recreation, shopping, and many other activities.

You can visit Vegas many times over and never see all that it has to offer.

Simply put – if you are bored in Las Vegas, you are going to be bored anywhere. 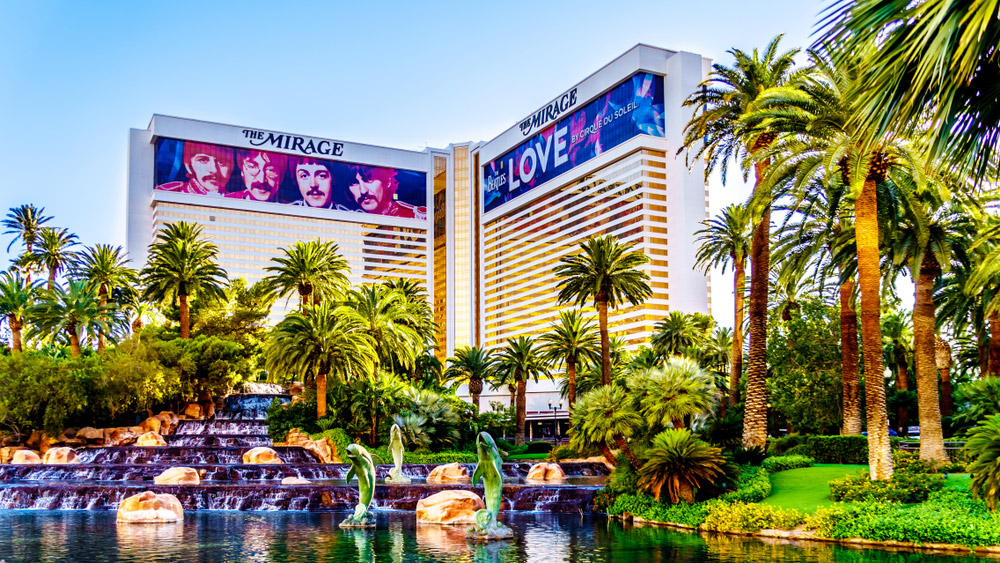 Even though the Vegas strip and surrounding areas have exploded in size, there is a limit for any city.

In order to have the best time on your vacation to Sin City, you will likely want to avoid some of the heavier traffic times.

Things like holidays and conventions draw more people to Vegas than other times of the year, and the crowds will make it harder to see everything you want to enjoy. There are more hotel rooms in Las Vegas than any other city in the world, and the prices of those rooms skyrocket when the city is especially busy.

By carefully planning your vacation time around the Vegas schedule, you will get the best possible rates and have a great time walking the Strip and exploring all that the city has to offer.

Following is a list of some of the busiest times during the year to visit Las Vegas. While there is pretty much always something going on in Vegas, these times are the worst for the crowds. 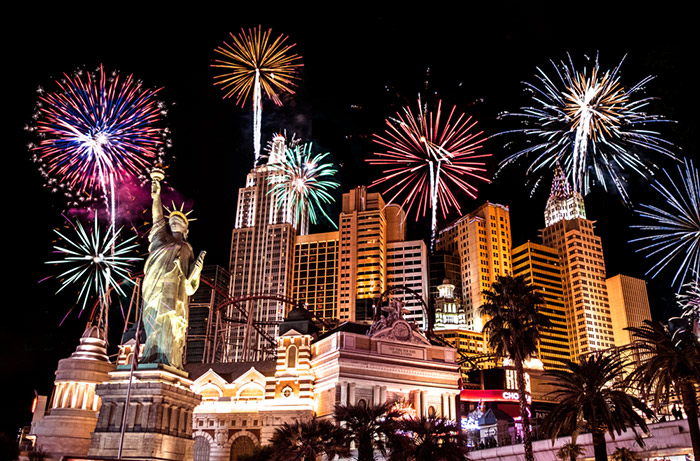 The mother of all party nights, New Year’s Eve in Las Vegas is pure madness.

While this is attractive to many, it also comes at quite a price in terms of room rates and crowds. The streets and hotels become overwhelmed with visitors, and flights are more expensive as well.

You will find long lines at every turn, and the overall experience of seeing Vegas will be hampered significantly.

Unless you are seeking out the crazy parties that come along with NYE, you are better off picking another time to visit. 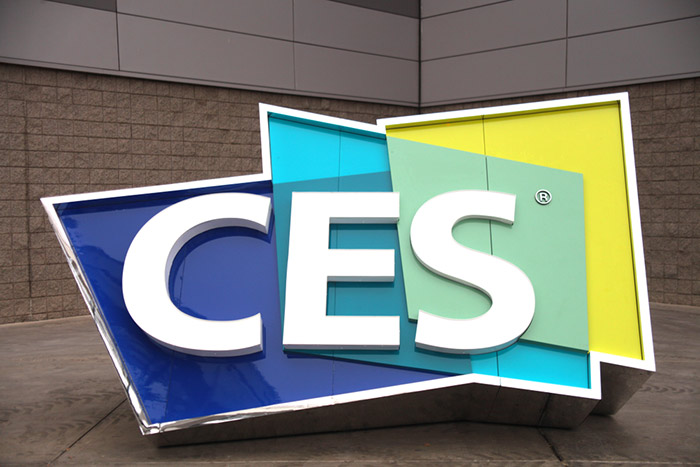 The consumer electronics show brings in a big amount of people as well as the Adult Entertainment Expo. CES has drawn tens of thousands of people to Las Vegas.

The AVN novelty Expo is the premier B2B event in adult entertainment and features adult toys, lingerie, gifts, supplements, games, furniture cosmetics, and much more. There are many opportunities for networking and workshopping at this event that draws around 25,000 people to the Hard Rock Hotel for the four-day event. 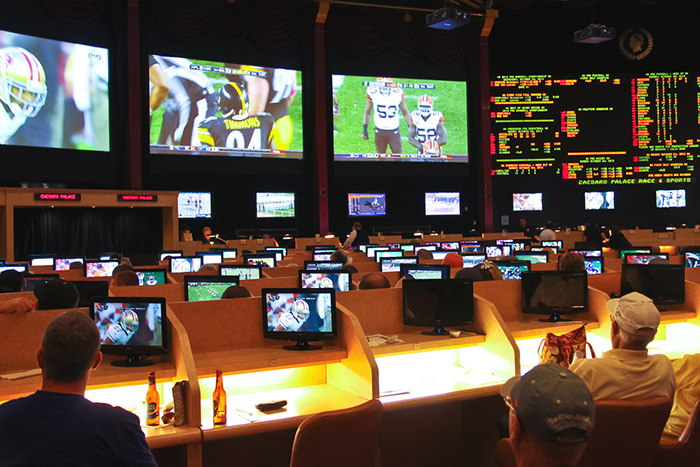 Super Bowl Weekend isn’t the busiest weekend in Las Vegas, but there is a surge in visitors with sportsbooks seeing more action than normal. There is more money wagered on this game than any other.

Casinos are known to throw parties and offer special VIP packages for watching the big game from one of their clubs, restaurants, or bars.

The Las Vegas Convention Center notes over 90% occupancy rate for hotels in Vegas during this weekend.

Some of the more popular Sportsbooks in Vegas include MGM, Caesars Palace, The Mirage, Golden Nugget, and Mandalay Bay.

Book early if you plan on being in Vegas for the big game.

This is one that can catch many visitors off guard if they are not sports fans.

‘March Madness’ is the nickname of the NCAA Division One Men’s Basketball Tournament, and it is high time for sports fans from all over to head to Vegas and wager on the games.

While the exact dates of the tournament vary from year to year, it is always on three consecutive weekends (usually the last two weekends of March, and the first weekend of April).

By far, the first weekend of the tournament will be the busiest in Vegas, with the games being played Thursday-Sunday. Lagasse’s Stadium at Palazzo Las Vegas is one of the most popular sports bars to watch the tournaments from.

The LINQ Promenade also features non-stop NCAA action with the games being shown on jumbo screens on the fountain stage and games and prizes to be won all weekend long. If you are not a basketball fan and not interested in wagering on the tournament, you would be wise to check the dates and pick another time for your trip.

The abundance of flights heading to and from Las Vegas makes it a great destination for a long weekend out of town. Since both Memorial and Labor Day weekends come with built-in days off for most workers, they become highly popular times to visit the desert.

Also, Labor Day and Memorial Day sort of mark the end and beginning of summer respectively, so travelers take the opportunity to get the summer started with a bang on end it with one more trip.

Memorial Day Weekend is when hotels are likely to kick off their pool party seasons. Visitors will often find special events and concerts, or tributes scheduled during these weekends as well.

You can probably find a room at these times, but you will pay for it. 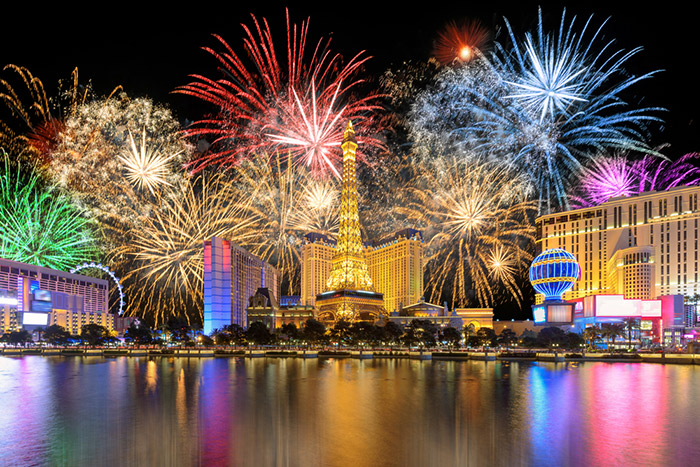 Celebrate US Independence Day in Las Vegas with all the lights and fireworks.

This weekend holiday is not as crowded as Memorial Day or Labor Day but will still be very busy and more expensive than normal weekends.

Many of the Hotels and Resorts feature firework shows including The Plaza Hotel. The LINQ Promenade hosts a parade and Paris Hotel is home to Beer Park which is a 4-day BBQ Event over the holiday.

You can be sure the hotels with pool clubs will be crowded so if you still want to visit during Independence Day, stay at a hotel without lavish pool accommodations to score a deal. 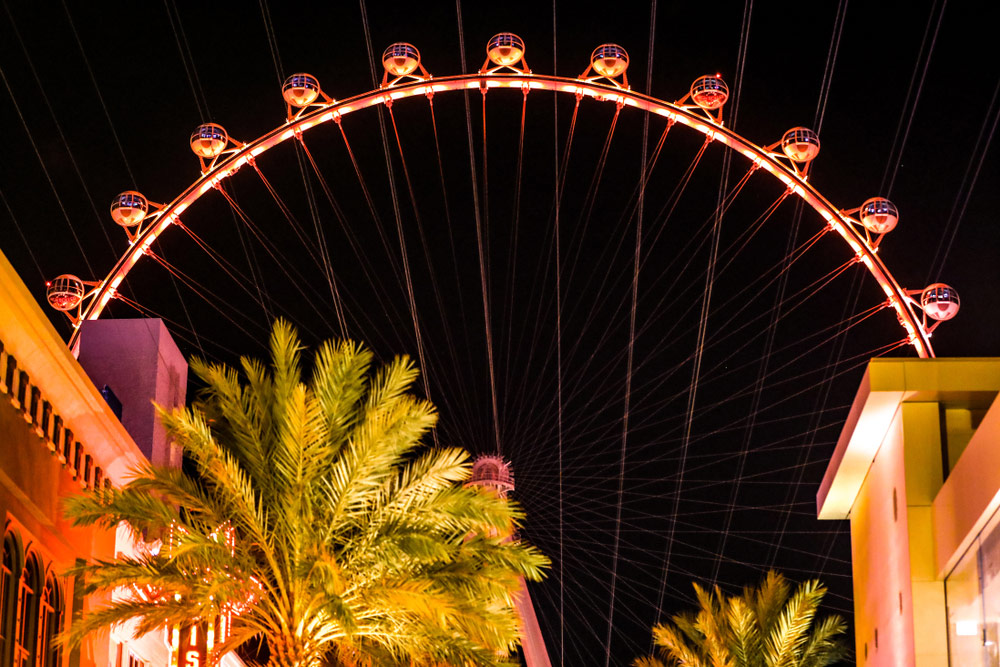 High Roller during Halloween in the LINQ Promenade.

What better place to get dressed up in costumes that Las Vegas. There are several Vegas nightclubs that have costume contests and themed parties. Halloween in Vegas is a totally different experience.

The majority of crowds and foot traffic will be seen after dark, but there are plenty of family-friendly events during this time of year that draws international visitors as well as bring in the locals for some fall fun.

According to a study, October also has the highest average hotel prices than any other month of the year, so if you are looking for a cheap trip, travel during July or December instead. 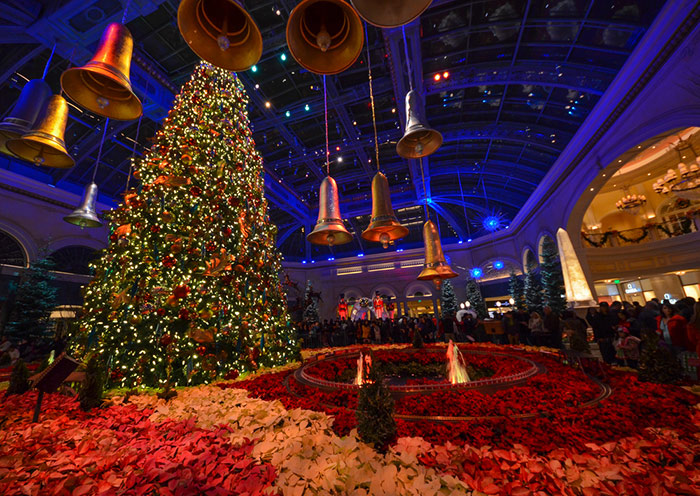 Christmas decorations at the Bellagio.

Not everyone stays home for the holidays. Thanksgiving weekend and the Christmas holiday are both times of big crowds and expensive rooms in Vegas.

Not only are airline tickets expensive due to the increase in people traveling, but hotels will quickly book as well with people planning their holiday vacations far in advance.

The Las Vegas strip is also one of the few places that doesn’t shut down on Christmas or Thanksgiving Day, so many people are drawn to the strip during these times.

If you decide to take your family on a trip at this time, be sure to book far in advance to get a rate that is more affordable than a last-minute booking. The city will still be crowded, but at least you can save a few dollars on your room expense. Also, if you plan to eat dinner on the strip, make a reservation weeks in advance of the holiday.

While rodeo might not be on the same level as football or baseball in terms of American sports, the National Finals Rodeo event in Las Vegas is a huge production. Early each December the year-end championship rodeo event comes into Vegas for 10 days and the city is once again packed to the brim.

There are many international travels that attend this event with the majority of contestants coming from the US, Brazil, France, and Canada. The competition has been held in Las Vegas for 33 years and in 2016, 170,996 people attended the 10 days of competition with the event being sold out every year.

Total prize money to be won at this event equals $10 Million and the excitement draws very large crowds. Hotels to avoid during this time are located near the Thomas & Mack Center including Trump International, The Palazzo, and MGM if you want to avoid the rodeo action.

Trade Shows – Throughout the Year

One of the most consistent forms of traffic in the Las Vegas area is the stream of trade shows that visit the city all year round.

When industries are looking for a place with the capacity to host a large number of clients and businesses (and entertain them as well), they often turn to Vegas. Some of the biggest trade shows can bring over 100,000 visitors to the city and inflate the room rates and congestion.

The Consumer Electronics Show and AVN Adult Expo are just a couple of the countless shows that visit the city. Before planning your trip, seek out a list of the trade shows and conventions coming to Vegas and make a point of avoiding the biggest ones.

There is always something going on in Vegas.

There is always something going on in Vegas.

You don’t need to look for a time with nothing going on in order to plan your trip because you won’t find a blank spot on the Vegas calendar.

However, sometimes are busier than others and you can save money and headaches if you avoid those peaks. Plan ahead, consider all of your options, and you will have a great time and get a great deal on your Vegas vacation!